If you haven’t heard, my family and I are moving in a week–from CT to VA–so I’ll be spending most of my time this week trying to get the house packed up and most of my time next week unpacking everything. Because I’ll be so busy, I’m going on a two-week blogging hiatus. I know, I know. I’m going to miss you, too. But don’t worry, I’ve lined up six guest bloggers to share with you, plus I’ll still be hopping on Facebook now and then. You can’t get rid of me that easily!

First up this week is my friend Amy from Funny is Family. If you’ve been around a while, you probably know Amy by now because I pretty much stalk her and share her as much as I can without anyone thinking it’s too creepy. (We haven’t reached that point yet, have we?) What you may not know is that Amy and I actually know each other in real life. We met when we were both members of the same mommy group. I’ll never forget one of the first times we were hanging out at another friend’s house. Amy’s daughter (who was maybe 1 and a half at the time) had gotten into the cat’s litter box–and Amy didn’t overreact or completely freak out. In fact, she laughed (after some quick cleaning and sanitizing, of course). And I knew right then she was my kind of people!

How My Daughter Changed My Body Image
by: Amy, Funny is Family 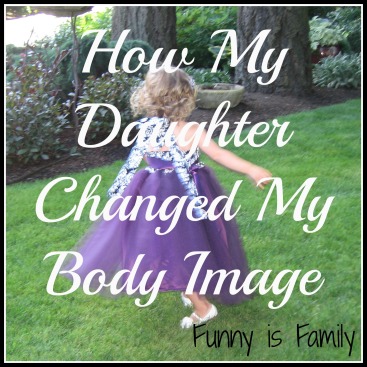 I’ve heard women say that after having a baby they felt powerful. That the experience of making and growing a whole human made them realize what they are capable of accomplishing. Not me. I wish I would have felt that way post-baby; instead I was dehydrated, lumpy, tired, and shocked. My entire pregnancy was a marvel of “I can’t even believe the shit that is happening to me right now.” Like how right before my baby shower, after choking on water from laughing too hard, I puked and peed my pants at the same time. I found pregnancy to be a total trip. It was fun and exciting, but I certainly didn’t feel like it was anything I was doing, more that it was something that was being done to me.

What I did feel after having Graham was GROUNDED. I was peaceful and content. I was also exhausted, and the sound of my baby crying made my heart and my gut and my boobs ache, but that was something that I understood. What I didn’t understand was my weight. I came home from the hospital weighing more than when I went in. I had just given birth, and I weighed more? I was sooo pissed.

I’ve never been small. I spent the bulk of my years as a size 8, from the ages 12-26. As a fairly sedentary person with a fierce love of bacon and beer, I knew I could weigh less if I wanted to get off the couch, but I couldn’t be bothered. My strong commitment to eating and not exercising was very apparent when my wedding dress had to be taken out three days before the wedding. If I couldn’t lose weight before my wedding, how was I going to take off the baby weight?

Well, I’ll tell ya. It took about six months for me to get cracking. Weight Watchers brought me back to my size 8, and after Lily was born I was able to lose the weight more quickly but not as thoroughly. Something else happened, though. After having a daughter, my feelings about my size and weight changed. Seeing my little girl whose tiny body had my exact pear shape made me realize that my shape is how I’m meant to be. I want to be healthy and fit, but I will never have lean hips. And that’s totally okay. If my daughter who bears a strong resemblance to me is beautiful, than I must be, too.

I started exercising and stopped matching my husband’s portion sizes. I lost twenty pounds and felt great. Almost two years later, I’ve kept most of the weight off, and at 35 I feel better than I did when I was 20. I know it’s not because of my size, but because I let go of unrealistic expectations. I sometimes still wish I was taller and thinner, but I don’t stand in the mirror and complain or put myself down. I’m sure that my daughter will learn that being dissatisfied with your appearance is what girls do, but I don’t plan on her learning it from me.

A big thanks to Amy for letting me share her post (originally published here). And if you’d like to hang out with Amy some more, please check her out on her blog, Facebook, Twitter, and Pinterest. She’ll probably have some beer. Unless she drank them all. Oh, and you might want to go on a night she’s trying something for her Crock Pot Thursday posts!

10 thoughts on “Guest Post: How My Daughter Changed My Body Image (From Amy at Funny is Family)”